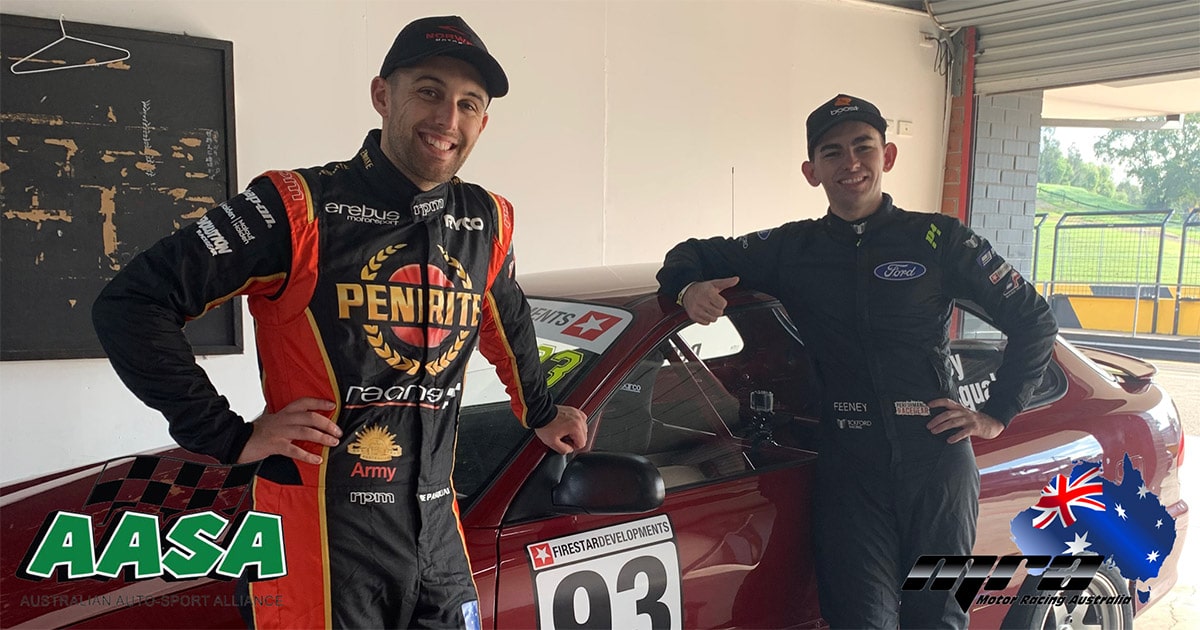 The first Australian circuit race meeting since the COVID-19 induced lockdown was successfully completed at Sydney Motorsport Park on Saturday, Round 4 of the MRA (Motor Racing Australia) taking place under the auspices of the AASA.

The meeting was held with strict social distancing regulations in place and was closed to public spectators, but attracted healthy fields of cars across all categories.

The first race of the day was the Series X3 NSW (Hyundai Excel) one-hour endurance race. After qualifying on pole position, Supercars stars Anton De Pasquale and Broc Feeney drove to victory; While De Pasquale dropped a few spots in the opening stint due to his unfamiliarity with the car, Feeney charged to the front when he took over at the pit stop, ultimately taking the win by almost 20 seconds.

Jeremy Hodges finished second after making an impressive start on the damp track, with Victorian Michael Clemente in third position. Defending champ Wil Longmore was fifth after a race-long battle with Preston Breust.

Monique Scibberas was well-placed after the compulsory pit stops, but received a two-lap penalty for not adhering to the minimum, three-minute time limit on the pit stop; Cameron Brown, Shane/Chad Nicholson and Mat Woodward were penalised for the same infringement.

It had been an eventful race for Woodward, who was one of three drivers who came to grief in an incident at Turn 1 which caused the first Safety Car intervention. Woodward spun off the circuit at high speed but was able to re-join the circuit; the same couldn’t be said for Ben Crossland (contact with the wall) or Michael Hodge (stuck in the gravel trap).

The NSW Pulsar Racing Series staged a pair of closely-contested 30-minute races. Defending champion Josh Craig won the first race, but Race 2 was a thriller in which Craig, Tim Colombrita, Matt Boylan, Michael Osmond and William Foot staged a race-long dice at the front of the field. Amazingly, Colombrita withstood the pressure from behind, leading home Craig and Boylan.

Kurt Macready starred in the Improved Production races, taking a pair of outright wins in his Under 2 Litre Nissan Silvia. The only race he was defeated was Race 2, which fell to Michael King’s Over 2 Litre Class Mitsubishi Evo, but King missed Race 3.

With the other Over 2 Litre front-runner, Scott Tutton, also enduring a mechanical problem in Race 3, it was a pair of Under 2 Litre entries occupying the top two spots at the finish, with Bob Jowett (Honda Civic) following Macready home. The best of the Over 2 Litre cars was Peter Hennessy (BMW M3) in third outright.

Drew Hall (Honda Integra) and Ashley Slavkovic (Nissan Silvia) shared the Super TT wins, while the program was rounded out by a pair of half-hour races for a mixed field of Mazda MX5 and RX8 Cup cars.

Andy Harris and Tim Herring each took an MX5 race win in their turbocharged MX5s, while Rob Hay did a good job to keep them honest in his naturally aspirated car, finishing an impressive second outright in Race 2.

After winning the first RX8 Cup championship round at Wakefield Park in early March, Ryan Gorton continued his impressive debut performance in the category, notching up a pair of race victories.